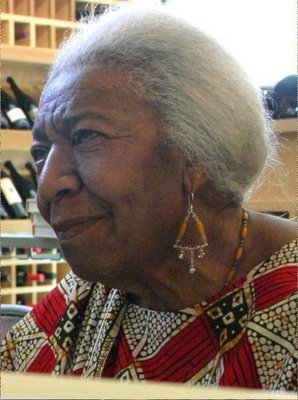 One of my cooking icons passed away earlier this week. I had the chance to meet her at Bulloch Hall here in , get her autograph in my copy of her first book "The Taste of Country Cooking" and spend a glorious 45 minutes or so talking with her about food and cooking. It is a favorite memory.

It was here in Roswell that Scott Peacock Her caretaker for the last 7 or 8 years and the chef at Watershed, put on an 80th birthday party at historic Bulloch Hall. Alice Waters sent produce. Peacock cooked the meal over an open hearth. It was an interesting relationship and one that that was very special for both of them. It always amazed me how a forty-ish, gay chef from wound up being such a soul mate and eventually caretaker for an old black woman.

Edna was the granddaughter of a Virginia slave and was born on April 13 (Thomas Jefferson's birthday), 1916, in Freetown, Va., a community of former slaves, and against all odds, created a shrine to great food at tiny Café Nicholson in New York. The café was an icon hosting such 20th-century luminaries as Truman Capote, Greta Garbo, Tennessee Williams and William Faulkner.

She was the Southern answer to Julia Child and influenced myriad cooks (including yours truly) around the country and insured the preservation of many of the South's disappearing food traditions. To quote Alice Waters, "Edna Lewis had the hands and soul of a great artist, and like all great artists, she had something of which the rest of us know little or nothing."

In 1995, the James Beard Foundation gave her its first Living Legend Award. In 1998, Saveur magazine placed her at No. 9 on its list of 100 favorite things, calling her its "favorite Southern cook and national treasure." And in 1999, she received the Southern Foodways Alliance's Lifetime Achievement Award and was named a grande dame by Les Dames d'Escofier International.

She was a fine lady and I am very happy to have met and talked with her. She will be happy to know that her cookbooks, especially the first, are two of my favorites and I am trying to keep the traditions alive as well.