Not Too Early for the Soap Box

Well, well. Nate Silver's 538.com now (post RNC bump) has Trump taking the majority of electoral college votes in November. It's way too early to get upset but not too early to say this for what will probably be 20 times before now and then.
Realistically you can vote for Donald Trump and what he stands for or you can vote for Hillary Clinton and what she stands for. That’s it. Those are the choices. If you choose NOT to vote for either or vote for Trump, you are responsible if Trump wins. Hillary is making her pitch in spite of the lies and obstruction thrown at her by the GOP and Donald is making his but in the end it is the voters who will decide, and to quote some lyrics, “if you choose not to decide you still have made a choice.”
It troubles me that people don’t understand that elections aren’t about their feelings and emotions. You look at which candidate is more likely to do things you like and which one is more likely to do things you don't like, and depending on your level of psychosis, you choose accordingly. Your emotions may impact how involved you get or if you donate or if you are enthusiastic about voting or if you go out and work to elect a candidate, but your emotions shouldn’t be shaping your decision. It's math and logic, get emotions out of it. Judging by how many poor and middle-class people have been voting GOP and against their self interest of the last few elections there is some serious psychosis out there.
Oh, and don't bother with reminding me that there is a Green Party and a Libertarian Party. They are there for people who refuse to think clearly and insist that emotion plays a part in all of this. Spare me.
h/t J.Cole for the inspiration
Posted by fallenmonk at 4:27 PM 2 comments:

Yeah, I'm still around....just spending what little web time I have over on Facebook. Life retired, walk the dog, garden, mow the grass. cook and eat.  Repeat.
Posted by fallenmonk at 1:32 PM No comments:

Yes I know I haven't posted anything here since January. I have no excuses other than I am an old man with all kinds of other things to distract me and much of what little I have to say can be said on Facebook.
No promises it won't be weeks or more before I post again. \\ but I'll try and pay attention.
Anyhow, working every possible day in the garden and it is coming along. We've had some good weather though a late cold snap delayed be getting some stuff going. It does seem that each year older it takes a little bit longer to get it all going plus really hard days in the garden are much harder to recover from.
Pretty much 100% recovered from the surgery though I still feel a twinge now and again and I'm still being careful about how much I try and lift which adds to my time to get things done in the garden.

The election campaign doesn't have me fired up as usual. I guess I'm getting resigned to it all. I'm a Democrat and will vote for whoever is the candidate. Emotionally I like Sanders but pragmatically it makes sense to support Hillary. Sanders would be nearly a divisive and our current President and will Hillary will be as well maybe not so much. Fortunately, I can't see the Rethuglicans getting any traction this election regardless of their candidate but the thought of Trump or Crux in the Oval Office is a bit daunting. Yikes!
Off to walk Zoey and then the grocery(It's old peoples day and you get 5% off for having one foot in the grave.)

Posted by fallenmonk at 8:21 AM No comments:

Almost back to normal. The recovery from the pre Christmas surgery has been very slow. The incision part is just fine though there is a bit of swelling still. The bad part has been whatever caused the hematoma and all the other swelling. Still tender and swollen still. I did manage a bit of a walk with Zoey yesterday and Saturday. Today we did the full mile.
Hard freeze last night and another forecast for tonight. I felt the need to try and salvage some of the cabbage in the garden so I went out Saturday and harvested half of it. Six very large heads all about 3 pounds each. The only thing to do with that much cabbage is to make sauerkraut so that's what I did yesterday. After trimming and everything I wound up with 14 pounds of shredded cabbage which is just the right about for a 10 liter crock and that is where it all is. Four weeks and we should be kraut.

While I was shredding the 14 pounds of cabbage ( big job!) I looked up and noticed a Copper's Hawk hunting in the backyard. One of his perches turned out to be the closest deck railing to the kitchen window. I was lucky to have my big Nikon handy and fortunate that I had the 300mm zoom mounted. I got some good shots. I'm calling this a Cooper's but it could also be a Sharp Shinned Hawk as they are virtually identical except for size. Anyhow here are a coupe of good shots. 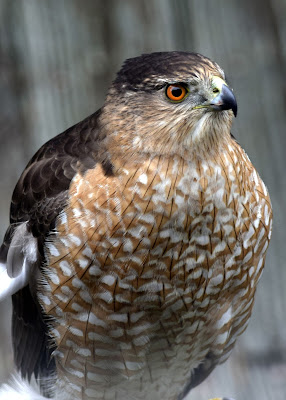 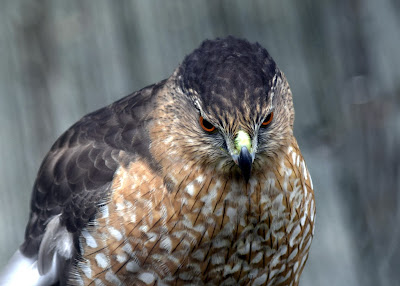 Posted by fallenmonk at 1:16 PM No comments: