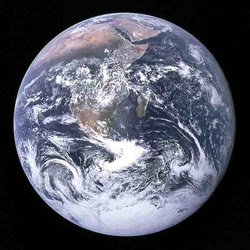 Our beautiful planet is dying. I'm an old man so it is likely I won't see it in its final death throes and truth be told, I don't want to. Still I am doing what I can to make a difference because I can see the effects of human activity everyday in my garden. You can make a difference as well. Since it was written about a month ago, 520 global scientists have signed on to this statement. You can also sign it as I have.  Maybe if enough of us do someone will pay attention. There is a lot more information, including ideas for solutions, at Stanford University's Millenium Alliance for Humanity & the Biosphere website.

Earth is rapidly approaching a tipping point. Human impacts are causing alarming levels of harm to our planet. As scientists who study the interaction of people with the rest of the biosphere using a wide range of approaches, we agree that the evidence that humans are damaging their ecological life-support systems is overwhelming. We further agree that, based on the best scientific information available, human quality of life will suffer substantial degradation by the year 2050 if we continue on our current path.
Science unequivocally demonstrates the human impacts of key concern:
By the time today’s children reach middle age, it is extremely likely that Earth’s life-support systems, critical for human prosperity and existence, will be irretrievably damaged by the magnitude, global extent, and combination of these human-caused environmental stressors, unless we take concrete, immediate actions to ensure a sustainable, high-quality future.
As members of the scientific community actively involved in assessing the biological and societal impacts of global change, we are sounding this alarm to the world. For humanity’s continued health and prosperity, we all—individuals, businesses, political leaders, religious leaders, scientists, and people in every walk of life—must work hard to solve these five global problems, starting today: 1. Climate Disruption 2. Extinctions 3. Loss of Ecosystem Diversity 4. Pollution 5. Human Population Growth and Resource Consumption.
The full statement has been signed by 520 global scientists from 44 countries. Those signatures were obtained within a month of completion of the statement, by direct email requests from the authors and their close colleagues to a targeted group of well-regarded global change scientists.   The signers include 2 Nobel Laureates, 33 members of the U.S. National Academy of Sciences,   42 members of the American Academy of Arts and Sciences, and several members of various European scientific academies.
PEOPLE WISHING TO READ THE FULL SUMMARY OR THE ENTIRE REPORT CAN FIND THEM AT http://mahb.stanford.edu.
AT THE SAME SITE PLEASE TAKE A MOMENT TO ENDORSE THE REPORT IF YOU AGREE WITH IT.  THE MORE ENDOSEMENTS THERE ARE FROM PEOPLE IN EVERY WALK OF LIFE, BETTER THE CHANCE THAT DECISION-MAKERS WILL PAY ATTENTION AND START TO TAKE ACTION.
PLEASE SPREAD THE WORD AS FAR AS POSSIBLE AND URGE THOSE YOU KNOW TO SPEND A COUPLE OF MINUTES TO REGISTER THEIR SUPPORT.