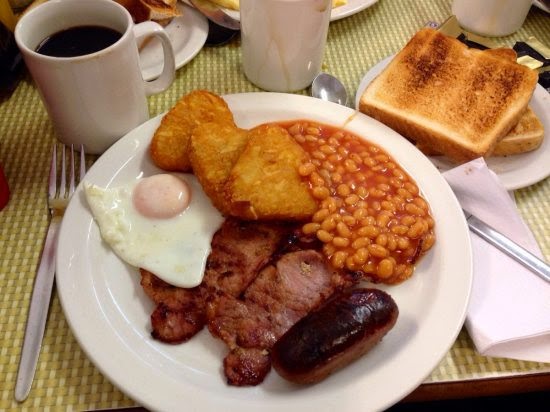 Saw this picture on The Chive today and it dawned on me that it has been ages since I had a proper fry up. Unfortunately, the only place I know to get English bacon and blood pudding is the British Shop in Norcross and I am going to have to think hard about a drive over there just for bacon. Though a good English breakfast on Sunday morning would be brilliant. And yes, all my English friends, I know that the tomatoes are missing as are the mushrooms but rest assured they won't be from my plate.
Posted by fallenmonk at 2:01 PM

Straight from Mrs. Hudson's kitchen; fit for Holmes and Watson!

I haven't been there in ages, but you might try British Isles™ in Houston (formerly British Market), in the Village next to Rice University. When I was drinking lots of tea back in my 30s, that's where I found it, the really good stuff. May be worth phoning them.

Thanks for the tip. We have a nice British shop in Norcross but it is a bitch of a drive. Only about 12-14 miles but some of the worst traffic in Atlanta. I'll get over there on some excuse sooner or later.