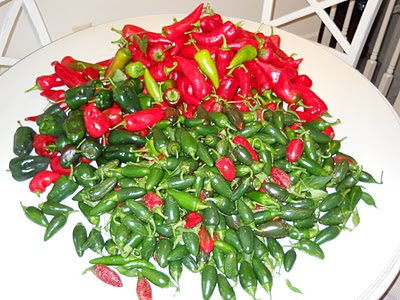 As I have mentioned it's garden cleanup time. The first possible frost date for this area is set at October 20th by the NWS and I like to have all the tender stuff out by no later than the end of October. Today I started on cleaning up some of the peppers. I hate to waste anything so the first step is to pick any late fruit. I started picking just the Carmen, Poblano and Jalapenos. I kept picking and I kept picking. I limited myself to only the red Carmens but I picked all but the smallest Poblano and Jalapeno. I filled up  both my garden baskets and had to stop. You can see the result in the picture as I have a kitchen table full of the little monkeys. There is nothing to do but spend the afternoon doing something with them and I have decided to make a pepper sauce. The combination of sweet red Carmen, mildly hot Poblano and the quite hot Jalapeno should make a sauce that won't blow your head off but have plenty of pepper flavor. I'm thinking it will need some garlic and for sweetness I'll use raisins. I've had a very nice pepper sauce that used raisins and it was delicious. I'll process it pretty fine and leave the pulp so it won't be a Tabasco like liquid but more of a thin paste. I refuse to let it all go to waste and I have plenty of canned roasted red peppers and pickled Jalapenos so there is really nothing left to do with them all. Since I didn't pick nearly all the peppers out there it looks like I'm going to have peppers at least until the first frost.  Truth be told I could just haul them all down to the food bank and be done with them but I feel the need to preserve them myself. There is my afternoon all planned out. Madam is going to freak when she sees the pile of peppers on the table but maybe I will have put a dent in them before she gets home. It is always hard to estimate but I would guess I'm going to wind up with about a gallon and a half, maybe two of pepper sauce and I've still got some of last year's on the shelf.

Update: Five and a half hours and it is done. I'll jar it up tomorrow. What am I going to do with 2 gallons of pepper sauce? Turned out nice and hot but not overly so.

Update 2: Turns out I have 22 pints of pepper sauce after all is said and done.
Posted by fallenmonk at 1:20 PM