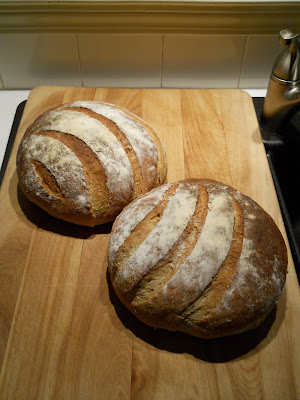 Freezing rain today in Hotlanta. I was supposed to work 6a to noon but they came around at 9a and sent me home. The store was dead and there were extra cashiers as they weren't going to open the garden today with the cold and wet. Another 6a to 1pm tomorrow. Just as well since I have things to do.

Madam has requested a large mac and cheese for some do tomorrow night so I will whip that out this afternoon and just throw it in the fridge and she can run it in the oven for tomorrow night. I'll bake some bread, though it will be a straight up whole wheat sourdough instead of the sourdough malted wheat I dreamed up last week. It was an experiment and it didn't turn out too bad. Actually just my standard sourdough with a little additional honey and a handful of malted wheat.

All the seeds are on order except the Dixie Butter Peas. My regular source Park is sold out and I haven't found another. I must have waited too late. I have some seed left from last year but not really enough. Madam and I both are big on these little lima beans and they will be sorely missed in the freezer if I don't find enough seed for a good crop.

I have been complaining for years about the lean pork we get here in the states (well from the typical grocery). You can now find proper Berkshire pork if you work at it. I have been trying to duplicate one of my favorite dishes from my time in Lyon but have failed miserably because of the lean pork. I think I have discovered the secret. The other day I got a small loin roast from Publix and instead of my regular method of a hot oven I used a slow oven(300F) and cooked it for three plus hours. It turned out moist and tender and was very nice. I did put a couple of strips of thick cut bacon over the top but I think the real trick is the low and slow. I'll try it again this way to confirm but outside of finding a proper piece of locally grown Berkshire pig I might have have stumbled on the way to do a proper pork loin.  Now I can try to duplicate the recipe from France. A nice think slice of roast pork that has been quickly browned served over lentils. Now that I think about it the English translation for the dish was Pork cooked in the Ancient Tradition with lentils. Maybe the "Ancient Tradition" is slow roasted.....duh!

Anyhow, a little guitar practice and a little cooking are in store for the rest of the day. If you are North of Hotlanta try and stay warm and dry.
Posted by fallenmonk at 11:30 AM