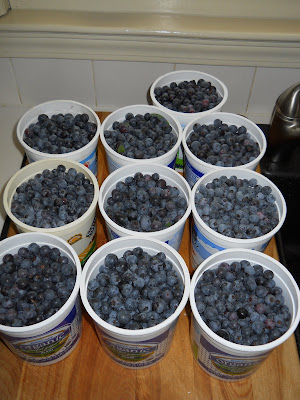 Nice night at the symphony last night. A little hot but it was bearable. Our host has 'posh' seats...actually a table for four with nice padded chairs. The program was 'Broadway Rocks' and there were selections from Jesus Christ Superstar, Phantom, Wicked, Tommy, Dream Girls, Mama Mia, and others. Four great vocalists all of which are headliners from Broadway. One was actually the Phantom on the Broadway run and the other Mr. Hyde and Jekyll in the musical. Enjoyed it.
Our host mentioned that he had filled his freezer with blueberries but that there will still plenty coming on in his garden and asked if would like to come over a pick some. We did that this morning and in three hours picked these 10 2 pound yogurt containers full. I've just spent the last couple of hours cleaning and sorting and dividing them into 25 pints  and putting them in freezer bags and they are all freezing as we speak. This should keep me in blueberries with my Joe's "O's" until next blueberry season and make a few blueberry tarts to boot.

Madam managed to get in the way of some yellow jackets after we got home from the blueberry expedition. She felt the need to cut a couple of weeds in the front island since she was already dirty and hot from the picking and managed to stir up a nest. Only five or six stings but if you have ever tangled with a yellow jacket you know how painful they are. What's worse, most on on her hands. I gave her a Benadryl and painted the wounds with  Benadryl as well. She is sacked out watching an old movie and nursing her wounds.
Posted by fallenmonk at 4:46 PM