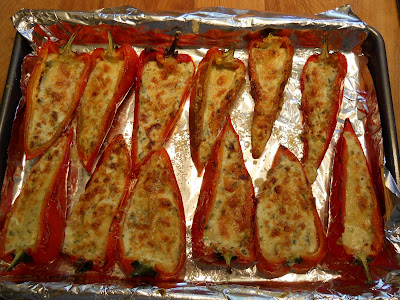 The new Saveur Magazine came yesterday and its main theme is the food of Greece. I love Greek food and Greek cooking and have since I was introduced to it in my teens when I worked for a Greek family in their small grocery. Later, when I was stationed in Cyprus, I got completely hooked on this ancient and wonderful food.
Saveur is the only magazine I read cover to cover and its monthly arrival is a cause for celebration. This issue, with all the Greek recipes, is a special treasure and I have cooked two dishes from it already. Since I am currently overrun with peppers the recipe for Peppers Stuffed with Feta seemed like a great choice. In Greek its 'Piperies Gemistes me Feta' and I can highly recommend it. As you can see from the picture, I made it for dinner tonight. Looks pretty good!  It is actually a 'meze' or appetizer/snack but I made it as a main course. I added a salad of tomato, cucumber and avocado and some grilled whole wheat pita. It made a nice little dinner. I cut the recipe in half for just the two of us and used Chervena Chuska peppers from the garden which I imagine are similar to the Florina peppers used in Greece judging from the pictures in the magazine(a sweet pointed red pepper). It is an easy recipe and definitely something you should try. Oh! and the other recipe I did last night was Zucchini Fritters or 'Kolokitho Keftedes' and while I think my batter was a little too thin (I tried to cut the recipe in half but its hard to halve an egg) they were very nice. I'll be trying a whole lot more of these Greek recipes in the very near future.
Posted by fallenmonk at 11:23 PM