A stunning image has been captured by the newest camera on the Hubble telescope and released by NASA.  The photo is the deepest ever taken of space.  In the image, thousands of galaxies dot the blackness in an almost incomprehensibly enormous cluster.  Some of the galaxies, each containing billions of stars and planets, are nearly as old as the Big Bang itself. Click on it to embiggen. 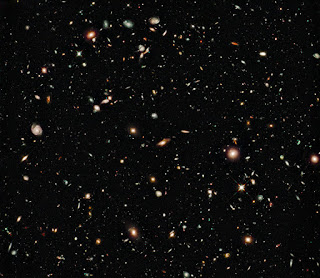 Since today is also the winter solstice Donna has a photo of a Tutulemma: Solar Eclipse Analemma that is seriously cool.
Posted by fallenmonk at 11:09 AM