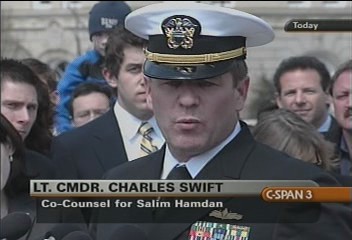 I want to echo Christy's hearty thank you and well done to Lt. Cmdr Charles Swift.

Here is what what you get by being honorable and competent in the Bush administration. Try and do your job as a defense attorney and uphold the defendent's rights and you are punished.

As a reward for doing his job well, for upholding and defending the Constitution and the rule of law, and for diligently representing his client, Lt. Cmdr. Charles Swift has been denied promotion by the US Navy, effectively ending his career in the military.

You see Lt. Cmdr. Swift was the one to draw the Hamdan case and since he is a man of integrity he did it well even if that meant going against the DOJ and the Whitehouse and their desire to rule by dictatorship.

When you are in George Bush and Don Rumsfeld's Pentagon, doing your job superbly and being committed to truth and the Constitution over political expediency gets you cashiered out of the service. The Navy and the JAG corps should be ashamed and will be the worse for it.

Posted by fallenmonk at 6:28 PM